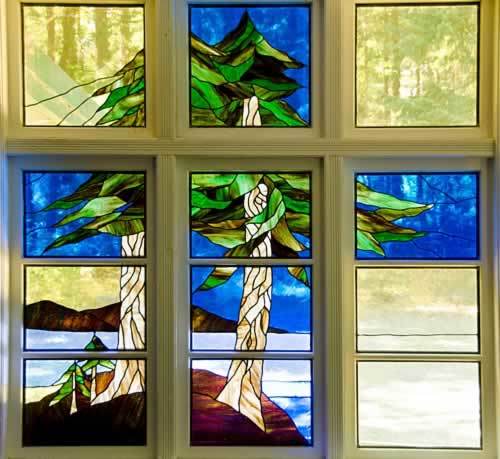 The stained glass windows in the sanctuary feature a central theme of local trees to complement the images and teachings from the Bible.

Local Gabriola glass artist, Darlene Mace-Harvey designed and installed all of the stained glass windows in the church.

About Our Windows in the Sanctuary

The windows project began in 1988, featuring a central theme of local trees to complement the images and teachings from the Bible.

The first window was installed on August 28, 1988 to commemorate the 75th Anniversary of the United Church and depicts our native arbutus tree. The Gray Family Memorial window, dedicated on December 18, 1988 features the dogwood tree and sheep. The Grays have a sheep ranch here on Gabriola. The third window to be installed is entitled Let There Be Peace. This Easter scene features a tree with a modern crucifixion scene imbedded in the trunk. The Sweet family in 1989 sponsored this window. On October 8, 1989, the Outreach window was dedicated and depicts a fruit tree with fruit harvested to share. At the same time, the congregation raised an equal amount of money for the Crosby Mission Boat Fund. The fifth window featuring an angel and Moses' burning bush was installed in November, 1992 in memory of Jack Steele who always sat below that window. He was a strength to the congregation. Artist Darlene Mace was given free rein to say something close to her heart in this final window in the sanctuary and she created The Stewardship of the Forest in 1994. It features our Douglas Firs and the elements of air, water, earth and fire. In 2010, a plaque was placed beside the window stating In Recognition of Roy and Gwen Hales for their years of service. About Our Windows in the Hall The centre hall window, boasting a beautiful red bird with its wings extended in a wide embrace, was dedicated in memory of Kathy Mary Fawdrey by her loving family that included our dear Sharon Wishart, the church pianist at that time.

About the Artist Dar Mace

We have been most fortunate to have local glass artist Dar Mace design and install all of the stained glass windows at Gabriola United Church.