Sermon, Prayers of the People, Order of Service and Announcements 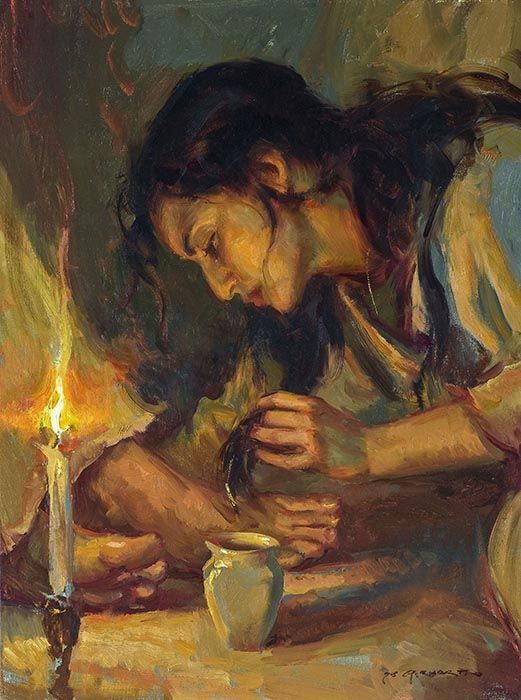 Sermon, Prayers of the People, Order of Service and Announcements

Karen Hollis 5th Sunday in Lent John 12:1-8
May the words of my mouth and the meditations of all our hearts be reflections of your word to us in Christ Jesus. Amen.

Um
Have you found yourself stepping outside in the past few weeks and taking a deep breath? Don’t you just love the smell of spring – perhaps lingering there . . . especially that first time your nose detects it after the winter. The olfactory memory bringing back springs of the past . . . for me it’s my dad cutting the lawn, that smell of freshly cut grass; walking leisurely to my friend’s house, literally stopping to smell the flowers on the way; we had rabbits growing up that would regularly tunnel out of the yard. . . often at dusk, my family would have to run around in the alley behind our house, chasing them back into their tunnel . . . and then finding a big rock to block it. We got quite good at it. Our olfactory senses hold the most vivid of memories, things we may well have forgotten until our noses catch a whiff of something that brings it all back. In the years that follow Jesus’ resurrection, how often do Mary and her family pause at that place where Mary poured the perfume over Jesus’ feet? The fragrance, having seeped into the floor, remains a reminder of that moment in time, taking them back to that evening . . . the energy in the room was palpable as they sat down to the dinner Martha had taken so much care to prepare. Since Jesus had raised Lazarus from the grave, the Pharisees had drawn a target on him, bringing his path toward the cross into focus, and increasing the tension within his inner circle. Lazarus, himself was there, eating like every other living person at the table, a constant reminder to them that there were things about Jesus that simply went beyond cognitive understanding. There at that table, they find themselves at a unique moment, in the midst of tensions between life and death, past and future . . . Mary and Judas express the truth of devotion and betrayal. John’s gospel narrative asks us to hold all of this in the image of this particular evening. After dinner, Mary quietly retrieves a jar of perfume. There is a truth in her that she must express, one that words cannot capture (and yet here I am trying to find some); what can she offer her teacher, but a pure act of sacrificial worship in response to his own coming act of sacrifice. In a flash her gift is poured out; some might say it was wasted, indeed it is not tax deductible . . . it is given and now it is useful only to God, only for this purpose to prepare Jesus for his journey toward the cross. In her sacrifice, she also makes herself vulnerable to the predictable criticism she receives from Judas as a woman . . . and as the only one who can perceive Jesus’ death. While Jesus rebukes Judas’ response, John keeps him in the story as an expression of inclusion in the shadow of the cross and the inclusive nature of God’s grace. No one is outside of God’s grace, not even Judas.1 We’re perhaps a bit surprised on this Sunday to already be talking about Jesus’ passion in this act of preparation. Don’t we have at least a week before we delve into Jesus’ final days? Particularly in John’s gospel, we see Holy Week coming from a long way off . . . and this is the moment they ritualize its beginning. As Mary responds to the still small voice that called her in this act to fill a role, so are we invited to step into ours, as witnesses of Jesus’ passion, as the living memory of who Jesus is and the sacrifice he made for the world. I wonder if as we hear the story and walk through it in our imaginations, we can almost smell the perfume that soaks that spot on the floor, carrying with it tensions of life and death; devotion and betrayal; suggestions of resurrection and anointing for burial; the dark and the light; God’s grace holds space for it all. This is the time of preparation so let’s make ourselves ready to witness and remember the transforming work of God. Amen.