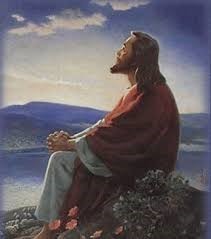 This will be our last Sunday of the “Easter Season” and next week we will be starting a new one with Pentecost!

Today I want to first briefly re-cap the Easter Season we have explored through the gospel of John as the backdrop for today's focus from Jesus’ prayer for his followers since  many of us have not been here for each Sunday (some even on the high seas) and finally since this season prepares us for Pentecost!!

After Easter Sunday,  we heard about two resurrection encounters the disciples had with the Risen Christ.  Staying with the gospel of John, we went back to a time when Jesus was with his disciples at the temple during the festival of Dedication and he deflected a question about his Messiah-ship and talked about how his works defined him and those that follow him know who he is!

Then we explored the “Farewell address” which came at the time of the Passover meal or what we call the Last Supper.  Here the gospel writer pulled together words and sayings that would prepare his followers for being on their own without Jesus’ physical presence.

The theme of “love” was prominent in these readings, and  one Sunday’s gospel ended with the saying “Everyone will know you are my disciples if you have love for one another.”

That might be a test question:  can you tell if someone belongs to a Christian church because they love for one another? (forget our history for a moment)

This theme of love continued with the remaining lessons this past Easter Season:  loving Jesus and one another and keeping his word are key to the gifts of the promised Advocate/Holy Spirit coming when he is gone.  This also prepares them and us for Pentecost.

Today we move to the last reading from this section of the address, which in retrospect,  I think might be better named The Transition Address for it clear Jesus is doing everything he can to prepare his followers,  as he continues on the path which will result in his crucifixion by the Romans.

Today we heard the words of Jesus praying for his disciples, those he is entrusting to carry on the work he has begun.  But if we listen carefully, he is also praying for those who will come to believe in Jesus as the Messiah, because of their efforts.  So,  we are inheritors of this intercessory prayer as well! One theologian (Belton Joyner) notes that there are three key issues within this formal prayer: Belief, Oneness and Love.

And under those three themes, there is, of course, the medium of PRAYER.

Jesus often when off by himself to pray,   which we know was reported frequently in all four gospels.  Given his own Jewish religious background this would not be unusual, for praying at least 2-3 times a day was common.

Today’s prayer that Jesus is giving, focuses on the community as a whole—in this case, the community of his followers.  It is critical, he seems to be saying, that they come together in love, loving one another as he (Jesus) loves them.  If they do that, they will be witnessing to the world— that they believe that Jesus is the Messiah, the one who came to bring peace for all.  Further, and all this makes logical sense but difficult to realize, that among them there will be a sense of oneness, the unity that is like what Jesus has with God.  Now the challenge for us here is to continue on the trajectory that encourages Unity, or oneness, but to do so, without assuming that unity means sameness without diversity.

Our church here on Gabriola is formed of individuals that come from several Christian denominations and each has different traditions. There is a comfort level in being able to enact many of them.  Some of us, for example, like to stand for the gospel reading, and others sit for all the readings…but that should NOT be cause for disunity.  In some churches, there are still kneeling rungs under the pews and whether one sits, stands or kneels does not dictate one’s membership rights.  However, prostrating oneself in the aisle might!

Three weeks ago, as many of you know,  I attended my grandson’s graduation from high school.  He attended St. Andrew’s -Sewanee School, an Episcopal boarding school as a day student, in the NE this would be called a prep school.  It was situated just outside of the entrance to Sewanee, the University the South, where his father joined the faculty/administration.  Most of the students were boarding students and to my surprise, from all over the world - among them young people from  China, Korea, two African countries and the U.S.  The senior class, with their own commitment to unity with diversity,  created a banner as one of their senior gifts  to the school and it was paraded in during the baccalaureate service.  On one side was the Cross of St. Andrew’s (Scottish Flag) and on the other in EIGHT languages, which represented their class,  was the statement YOU BELONG HERE. What an awesome declaration and it blew away all my stereotypes about the Appalachian Mountain people and institutions...

Granted, universities and schools are often oasis’s wherever they are,  but this went beyond any expectation or hope!  Even the student’s valedictorian speech was something that any advocate for unity within diversity would be around to declare!

I believe,  that we in our community, have set out to welcome everyone and hopefully we will one day be known as an ever-expanding inclusive community based on Christian love,  just as I saw it in this high school class.

Our Sunday worship service is filled with many forms of prayer:  We have some silence, we sing songs of praise/psalms and readings each Sunday as well.  We offer thanksgiving and intersessions, all in/for community and early in the service we exchange the Peace which helps to set the stage that we know we are here together as individuals.

Let me move to a focus on our individual prayer life.  As a church, we have an active prayer wheel which many have joined to support those who have requested supportive intercessions.  That is an important element in our commitment as a Christian Community committed to love!

In-between Sundays I have learned that it is critical for me to have an active prayer life.  I don’t think I have reached the level of my Scottish ancestors, if you read Alexander Carmichael’s, Carmina Gadelica, Gad el I ca,  it is clear they had prayers and blessings for everything:  kindling, lighting the fire, herding the cattle, fishing, hatching eggs, working on the loom, journeys short and long, newborn babies, the sun and moon, the saints and the Holy Family, and the list goes on.

But for me, at least starting the day with a thank you or a contemplative time to just be, sets a good tone.

Let me quickly share some resources for jump-starting your active prayer life or just giving it a boost.

I recommend Anne Lamott’s book:  Help, Thanks, Wow: The Three  Essential Prayers.  She writes with insight and humour and such practical wisdom.  For example:

Gorgeous amazing things come into our lives when we are paying attention: mangoes, grandnieces, Bach, ponds.  This happens more often when we have as little expectation as possible.  If you say, “Well, that’s pretty much what I thought I’d see,” you are in trouble.  At that point, you have to ask yourself why you are even here.  And if I were you, I would pray “Help,”...

My best days at work for Digital Equipment Corporation, came when I had my day timer open on the seat next to me on my way to work.  At each stop light, I would read one name and then pray for that person and then the next and the next. Fortunately, there were enough lights or stop signs for me to get through the day.  Those days turned out great!  Guess why??

And I learned a well known secret first hand.   The people I had the most challenging time with—when I actively prayed for them, they turned out not to be so difficult!!  Prayer does change the prayER as well, I suspect!

Try on Richard Wagamese’s, Ember’s.  In the book, this Ojibaway reminds me of the character Tevia in Fidler on the Roof.  He has conversations with the Creator, which is a form of prayer:

My deal with the Creator is this:  I’m dragging a sack old worries, hurt, anger, doubt and fear up a long hill trying to get to the other side, to relief, to healing.

Creator:  I promise that I will always be there to help you.  But there’s a catch.

I say: What’s the catch?

Creator says:  You have to pull first.

And if you, like me you frequently wake up in the middle of the night (three am seems to be my time) try this suggestion from The Little Blue Book of Prayer,  by the Rabbi’s Lionel Blue and Jonathan Magonet:  Imagine all people who are awake with you. Imagine them, say hello to them in your mind and ask God to bless you and them together.

They then suggest for example you might start here:

Lord, I pray for:

Patients in hospitals who can’t sleep

People who missed the last..ferry, trains..

Parents woken up by babies….

Your prayers will go out and chances are you too….and you would have done some good too!

Today, we each have so much to be thankful for, so let us be thankful that Jesus established such a model for us to follow, a model of prayer that brings us closer to him and the Creator and one another.

And of course, there are times when we feel disappointed in the response!

I have been told, God answers prayers in four potential ways:

I have something better for you..

Or as many of you have head before ,what a friend taught me about being  patient, as God is patient with each and every one of us:  My friend from Washington, DC said that in her church there was a saying:  God doesn’t come always when you call him but he sure does come on  time.

As we move toward Pentecost let us give thanks for the life, work and prayers of Jesus our Redeemer and pray that we will hold up his prayer for us in our hearts and for all the followers that are gathered here today and beyond. Let us hold each and everyone in loving prayer!  AMEN