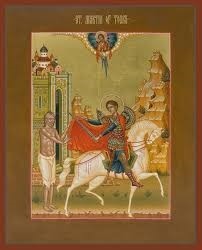 Sermon, Prayers of the People and Announcements for November 10, 2019

Celebrating feast days of saints is as common as the Lord’s Prayer for some of us in the church, and is still a stretch for others. St. Martin is a special saint for us because he is the namesake of one of our founding churches, and even though we don’t carry that name anymore, I feel strongly that, at least for now, we continue to celebrate his feast day. The obvious reason is to honour our history, but there’s a deeper reason. I’ve been learning St. Martin’s story over the past couple of years, and it’s become clear to me what a remarkably good fit he is for our congregation and for Gabriola. Whoever chose the name for the new Anglican church all those years ago, chose well . . . and here are my thoughts about why.

The iconic story of St. Martin takes place during his military service. It was winter, a particularly cold winter and while riding along, Martin encountered people who were under-clothed, shivering, and reaching their hands out in need. He was moved with compassion and offered each person he met an article of clothing. As he was riding into a town called Amiens, he encountered yet another person freezing in the cold. Martin, with only his cloak left to clothe himself, took it off, cut it in half with his sword, giving half to the man and keeping the other for himself.

There were people on the street watching him; some laughed because he was quite improperly dressed. But others who had more depth of understanding, groaned deeply because they themselves had not acted with such compassion . . . realizing that they had much more to give than Martin and could have clothed the man without reducing themselves to nakedness.[1]

That night Martin had a dream that Christ came to him wrapped in the piece of cloak he had given away, saying, “Martin, who is still but a catechumen, clothed me with his robe.”[2] Can you hear the echo of the text we just heard: “just as you [clothed] one of the least of these who are members of my family, you did it to me.” (Matthew 25:40)

This response came naturally to Martin; no one taught him or showed him how to be compassionate . . . he just did it. His actions are indicative of a deeper truth that lived in him and he developed in himself over time through his Christian practice. Martin became a monk and taught a group of disciples, who lived together in an intentional community, owning everything in common and devoting their lives to prayer and study. Martin’s biographer Severus recalls their first meeting, “What gravity, what dignity there was in Martin’s words and conversation! How ardent, how forceful he was, how prompt and quick in explaining difficult texts of Scripture! . . . never have I heard from any other mouth such knowledge, such innate talent, such discourse at once so good and so naturally eloquent . . . There was not a single hour, there was not a single moment in which he was not devoting himself to prayer or applying himself to reading.”[3]

He sounds like a pretty intense guy, a big presence with gravity and dignity; he was so clear and aligned in himself, so committed to his path of discipleship. He was always clear and committed as a young person, but as an established adult, after nourishing his authentic path of discipleship, he was then able to hold that space for others and help them along the monastic path.

While being a monk isn’t for everyone, that impulse to serve others . . . that call on our lives is quite universal. This quality is at the centre of the gospel and is present in religions all around the world. Service of others is rooted in our humanity. Some people are like Martin who when seeing a person in need, quite naturally generate a response; some are like those who observed Martin on that winter day in Amiens, who need an example of such service to realize they too have something to offer . . . that they could actually make someone’s life better. Whenever that spark happens in life, it moves us to help our neighbours, serve meals, visit the sick, organize fundraisers, serve on boards of non-profits, deliver wood for the Lions club, the list goes on.

When I look at this iconic picture of St. Martin I see now a whole range of human experience in the world, from people in need to those who readily offer themselves, and those who are able to serve and just need someone to show them how. But it’s also a whole range of human experience inside of us – some days we feel like we have lots to offer, some days our needs exceed our ability to give, and other days we are reminded of the abundance out of which we can serve. And as we go along in our ways of serving, perhaps someone notices, and thinks, “I could do that.”

St. Martin was a good choice for a church on Gabriola island . . . for a community that isn’t perfect, but will go to great lengths to reach out and serve the present needs, inspiring others along the way. May St. Martin continue to bless us, teach us and serve alongside us. Amen.